Blog - Latest News
You are here: Home / Blogs / Surviving the charge of a duck 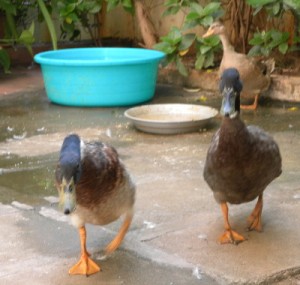 As I am often far from Pondicherry where we live, my wife purchased three ducks for company. One male duck is territorial and charges. I have seen our servant giving him a good whack with a stick (she was told not to hit the duck) because she is frightened of him, even though he is a perfectly innocuous animal. Its bite is nothing more than a tickle. However, I was also charged and observed that I felt a strong reaction. A duck weights two kilos and a human-being sixty kilos. A human-being is thirty times heavier than a duck. In the same manner an elephant is tens of times bigger than a human being, but would feel a bolt of emotions if anyone goes directly towards it.

In my opinion, there are four situations pertaining to encounters with elephants or other wildlife: the animal is unaware of human presence, aware but comfortable, uncomfortable, and sufficiently disturbed to flee or charge. I am talking of situations instead of distance because one can be very close to animals but undetected if our scent does not waft towards them. Response distances also varies with sex and conditions. Female elephants with babies are extremely aggressive and will be uncomfortable with humans as soon as they detect them.

With wildlife, responsible people will not go to the extent of disturbing animals. It is unethical to ask jeep drivers to provoke an elephant to charge, and photographers should not disturb birds roosting or nesting. Wildlife observation by itself provides sufficient pleasure when animals are left to their own devises. Beautiful encounters happen only when their behavior is natural, when they are not threatened in any way.

Many television programs disregard ethics to be sensational. Professional people disturb animals only I they must. For example, animal surveys create disturbance, but still need to be carried out if we want to know how many animals are present in a reserve. Beyond absolute necessity, no one should take the liberty to provoke additional stresses to species that are on the verge of extinction, because it endangers them further. Moreover, it is dangerous and too many people are killed by “accident”, that are not really accidents but involuntary or voluntary provocations.

The SNT property, also known as Cheetal Walk, in the Sigur plateau of the Nilgiris Biosphere Reserve, India, consists of approximately 30 acres of land (12 ha) protected as a private reserve by E.R.C. Davidar and his children. The land connects the Reserved Forests of the Kalhatti slopes with that of the Sigur plateau. The location and ecological importance of the place were described in ‘Cheetal Walk’ (Oxford University Press, out of print) and in ‘Whispers from the wild: writings by E.R.C. Davidar’, Penguin, 2012.

The Sigur Nature Trust is a small wildlife reserve, a corridor or passage for wild animals in between two villages. Without the SNT, this location may have been developed and the development would have contributed to merging the two surrounding villages, closing access to the Sigur River for wildlife.

More than a reserve, the SNT It is a place to reconcile humans with nature. We have stringent rules for humans, for sure, but no rules for animals – they are at home. We accept them as they are and observe them. Just sitting and admiring, we document astounding behavior, sounds, romance, friendship, techniques. We develop a sense of belonging. We know “them”, “they” know us.
Revelation on World Elephant Day Nature is sacred: start worshiping at home.
Scroll to top