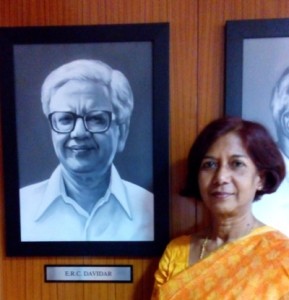 It is an immense honor to announce that E. R. C. Davidar, the founder of the Sigur Nature Trust, has joined eminent foresters and conservationists in the Hall of Fame of the Tamil Nadu Forest Department.The inauguration of the Hall of Fame was organized on the 31st January 2016, in the Panagal Building and inaugurated by Thiru M. S. M. Anandan, the Minister of Environment and Forests, Government of Tamil Nadu, Thiru Hans Raj Verma, I.A.S, Principal Secretary to the Government, Dr. Krishna Kumar, Principal Chief Conservator of Forests and HOD, and Dr. V. K. Melkani, PCCF and Chief Wildlife Warden.

Dr. Priya Davidar, Managing Trustee of the Sigur Nature Trust, participated to the inauguration. Following the example set by her father, she recalled that it is imperative to preserve wildlife if our civilization is to survive. In this effort, the involvement of society is crucial, as acknowledged by the Hall of Fame where distinguished foresters are in the company of dedicated citizens.

Times of India has dedicated an article to this event:

The SNT property, also known as Cheetal Walk, in the Sigur plateau of the Nilgiris Biosphere Reserve, India, consists of approximately 30 acres of land (12 ha) protected as a private reserve by E.R.C. Davidar and his children. The land connects the Reserved Forests of the Kalhatti slopes with that of the Sigur plateau. The location and ecological importance of the place were described in ‘Cheetal Walk’ (Oxford University Press, out of print) and in ‘Whispers from the wild: writings by E.R.C. Davidar’, Penguin, 2012.

The Sigur Nature Trust is a small wildlife reserve, a corridor or passage for wild animals in between two villages. Without the SNT, this location may have been developed and the development would have contributed to merging the two surrounding villages, closing access to the Sigur River for wildlife.

More than a reserve, the SNT It is a place to reconcile humans with nature. We have stringent rules for humans, for sure, but no rules for animals – they are at home. We accept them as they are and observe them. Just sitting and admiring, we document astounding behavior, sounds, romance, friendship, techniques. We develop a sense of belonging. We know “them”, “they” know us.
Catastrophic loss of fishes in Sigur Halla Nilgiri Pollution Reserve
Scroll to top